All of them have a Bible, a keen interest in athletics and a sharply drawn desire to be a good Christian.

These are the participants in a conference of the Fellowship of Christian Athletes. These are the men and boys who make up the eager, active group who are exploring new experiences in healthy exercise, both of the body and of the mind.

Sometimes you can hear a pin drop and sometimes Yankee Stadium couldn’t hold all the noise. It’s a gay time and a solemn time, superbly mixed. It’s a blend of eager yells of excitement and whispered words of intense prayer.

This is the spirit of the organization being lived on a first-hand level. Here you find unswerving allegiance to the founding principles: athletics and Christianity brought together in inspiration and perspiration.

In Acts 1:18, you are challenged, “You shall be my witnesses.” At these three conferences, which each year bring to a culmination the work of this growing organization, you have a true meaning put into words and action as Christianity and athletics are brought ever closer. Here muscular witnesses learn and train to become muscular missionaries of the World of Christ. They create a living hymn of strength, action, vitality, power and enthusiasm. For indeed there is a collective vibrancy which sings with the health which can only be created by 600 wholesome, healthy youngsters. Here is created a feeling and power which could never be duplicated in any other gathering or activity. 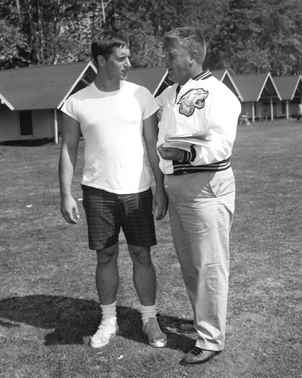 Each conference is built upon about 50 percent perspiration and 50 percent inspiration. There is a time for the spiritual and a time for the physical. In keeping with the purpose of the organization, it encourages athletics based upon Christian principles and those who excel are placed upon God’s team. These are the leaders who will mark the path for others to follow. Here are created personalities which will speak God’s Word and provoke others to follow this path.

James Stewart once said of these conferences that they were to “not to make good men, but new men.”

From whom did the inspiration come? The answer reads like a roster of all time greats in the world of athletics.

At Henderson Harbor, the Coaching Staff included such men as:

The Coaching Staff at Ashland, Oregon found such names as:

And check these famous names who appeared at the Estes Park conference:

Bill Parker, sports writer for the Nashville Banner, wrote, “What other cause, or organization, could assemble a staff comparable to this one the athletes and coaches were treated to hear at the Fellowship of Christian Athletes national conference? It’s a million dollar staff. The men donate their time and efforts to the FCA movement. Many of them pay their own expenses…most of them are on the schedule for only a single talk, yet come for the entire conference.

“These men don’t profess to have all the answers to Christian living, but through study and exchange of ideas with others having similar problems, they hope to find them. In most cases, the coach or adult leader benefits right along with the youngsters to whom he is giving advice and direction.”

From the words of the men comprising this staff came “springboards” for those attending to pursue their faith toward greater heights in Christian living.

In summing up the 1961 conferences, the late Bob Stoddard wrote: “During those two weeks we could not help but wonder and marvel at our youth – exuberant, boundless, vital, healthy, jumping, running, living days that are great days – the green years – the richest moments of life at high tide. Maybe we secretly wished, as we watched their activity, that this energetic zest for life might always remain. I do know this, that we all sincerely pray that each boy, yea each man present, might return to his church and know through the experience that he makes at Life’s counter will last the longest.”